The bears were purchased in 1954 at a Stuttgart toy store by several members.  They were purchased on a whim, and were never intended to have any special significance.

Soon, however, they began to accompany our members to brewery evenings and eventually traveled everywhere with the orchestra.  Walking along towing a bear was a great way to get a few chuckles (or occasional frowns) from passersby and to meet people.   Forward was the smaller bear, Onward the large one, and George Andrix brought in Sideways when he joined the orchestra in 1955.  There had been no intention of using the bears as an Army irritant, but it turned out that way after they stood a few inspections and appeared on a few stages with us.

Many Army officers thought the bears were undignified, childish, and somehow reflected poorly on the Army. Even some orchestra members were upset by the presence of the bears. Other officers, though, accepted the bears in the lighthearted spirit in which they were intended. One such was escort officer Captain Burke, a veteran of heavy combat in Korea, who occasionally even took charge of properly placing the bears on stage for concerts -- one on the left, one on the right.

In late 1955, things became too hot for them to remain in Stuttgart.  They were shipped home to the states, where they still reside, although somewhat the worse for wear.  The end came with a direct order from our Colonel to "make sure none of those silly-ass bears are on the bus."

These were probably drawn by Arlie Moran (Violin, 1958)
The artist was identified by Homer Holloway 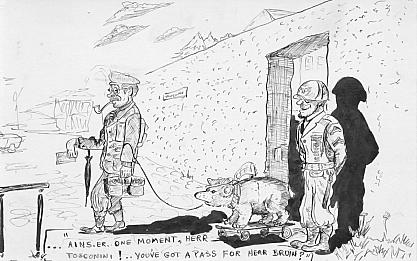 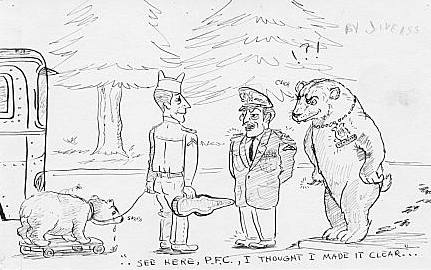 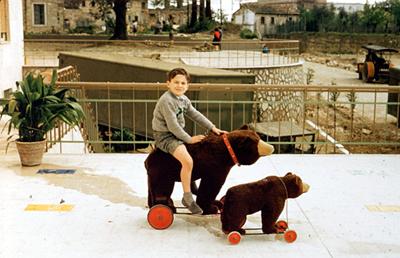 Onward and Forward were always willing to be good will ambassadors 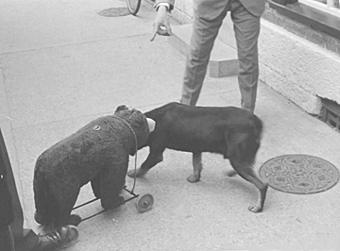 Once in a while, a real live animal would encounter the bears -
as usual, this pet is mystified by an animal on wheels